Founded in 1954, Apache Corporation is a worldwide oil and gas exploration company with operations in Egypt, the United Kingdom, and in the Gulf Coast and Permian Basin of the United States. In the Permian, Apache has over 2.9 million gross acres with exposure to numerous plays focused primarily in the Midland Basin, the Central Basin Platform/Northwest Shelf, and the Delaware Basin. 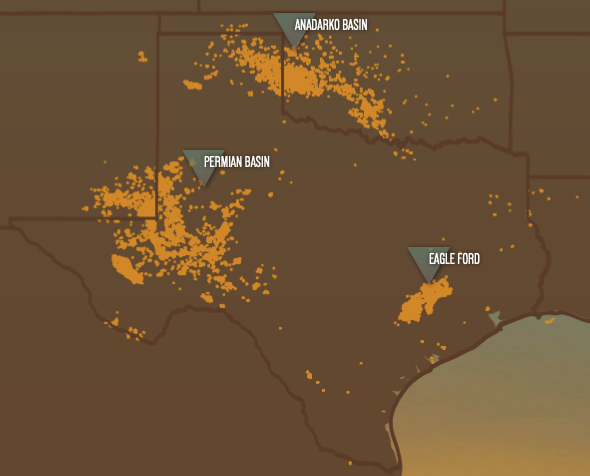 In September 2016, Apache Corporation announced the discovery of a new oil and natural gas resource play in the southwest corner of the Permian Basin called Alpine High. The geographic outline of the play extends over 60 miles and stretches across the southern half of Reeves County, Texas. 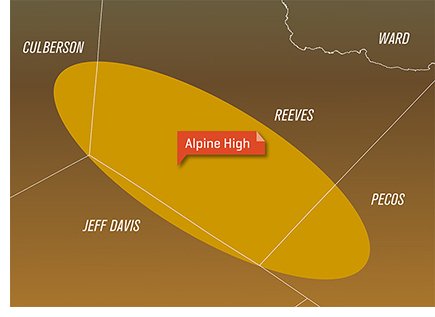 Apache CEO says, “A key part of our corporate vision is to be premier, which means to be the best, and that extends beyond financial results. It begins and ends with having the best safety and environmental record.”

Apache uses their global platform to help drive sustainability and human progress – not just profits. Using their global reach to deliver shared value to all of their stakeholders around the world. Apache strives to deliver long-term, profitable growth to their shareholders, while helping to fulfill global energy needs and developing innovative, more sustainable ways to operate. Apache aims to be a community partner in their areas of operation, focused on protecting the safety and health of their employees, local populations, and the environment.

Sustainability is at the top of Apache’s mind. Not only is Apache protecting what’s on the ground and in the air, but they took it one step further to help protect Texas’ dark starry night skies through the Dark Skies Initiative–McDonald Observatory’s campaign of education and awareness to protect West Texas’ dark starry filled skies for ongoing astronomical research and education.

Apache has worked proactively with the McDonald Observatory to develop dark skies measures for their facilities and help to promote best practices across the region.

Internally, the company developed a strategic plan to implement dark skies friendly lighting in new installations and existing facilities and has implemented a number of important modifications, including installing shielding on certain lights, experimenting with different fixtures, and adjusting their lighting to point downward rather than up toward the night sky.

There are now more than 2,700 lights in the Alpine High play across Apache’s sites. Company personnel are tasked with checking each one individually every week to ensure Apache stays in compliance with dark skies measures. Apache discusses dark skies compliance at their regular employee and contractor safety meetings to keep this important issue top of mind.

Apache is dedicated to a culture of dark skies compliance throughout Alpine High operations. Apache feels that a properly shielded and aimed light drastically reduces glare and increases nighttime worksite visibility and light fixture efficiency. As a result, worksite hazards are more readily identified and mitigated, all while using fewer lights per site. 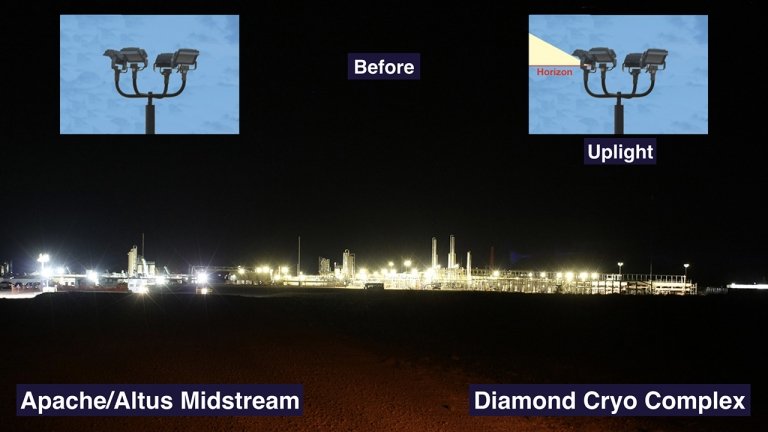 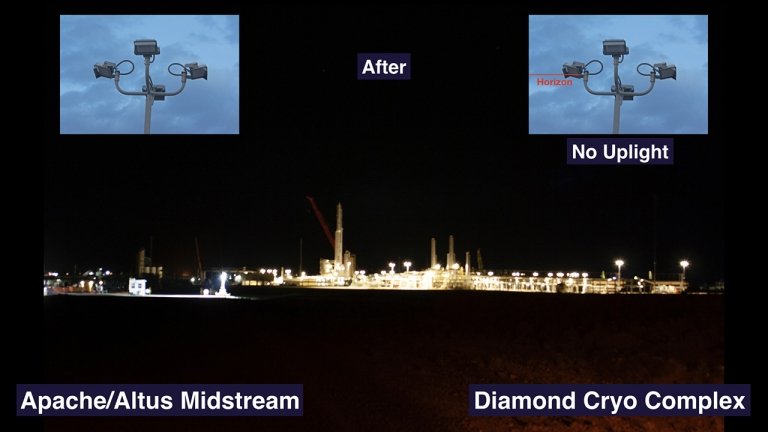 Located atop Mount Locke and Mount Fowlkes in Fort Davis and under some of the darkest night skies in the continental United States, sits the 500-acre world-renowned University of Texas at Austin’s McDonald Observatory. The Observatory’s mission is to inform, educate, and inspire through their public programs, and support the teaching of the science and hobby of astronomy. The Observatory hosts approximately 100,000 visitors each year and is the second largest employer in Jeff Davis County.

Through a campaign of education and awareness, the Observatory’s Dark Skies Initiative seeks to protect the beautiful, milky-way filled night skies of West Texas for ongoing astronomical research and education. To protect the dark skies over the Observatory, the seven counties (Jeff Davis, Brewster, Presidio, Hudspeth, Culberson, Reeves, and Pecos) surrounding the campus have outdoor lighting ordinances and all the cities within these counties have similar municipal ordinances. This represents 28,000 square miles of land with outdoor lighting ordinances, for the protection of dark skies–the largest area protected for dark skies in the world!

In recent years, the increase of oil and gas activity in the Permian Basin and all the development that comes along with it, has resulted in an increase of light pollution that threatens the dark skies. The Dark Skies Initiative staff have been working with oil and gas companies like Apache Corporation, businesses, and homeowners in local communities to make all lighting dark skies friendly.

McDonald Observatory surrounded by mountains that are outlined by the glow of light coming from the Permian Basin (note that the skies overhead are still extremely dark). With the help of companies like Apache implementing the Dark Skies Initiative, we hope to preserve dark skies so generations to come can enjoy visiting the McDonald Observatory.

By implementing dark skies friendly lighting, Apache is not only increasing their worker’s visibility and safety, but also helping to keep West Texas’ night skies dark to positively impact the McDonald Observatory’s research and education and the health of West Texas’ wildlife and people.

Contact Taylor Keys at taylor@texanbynature.org & 512-284-7482 or Bill Wren at bwren@utexas.edu & 432-386-6947 if you would like to learn more, get involved, or be recognized for your Dark Skies Initiative efforts.

The project increases visibility and worker safety for numerous Apache employees and countless vendors who visit their sites. Researchers and the 100,000+ plus people that visit the McDonald Observatory each year have dark starry skies to observe.

Over the next two years, Apache is contributing more than $250,000 to support the Observatory in developing industry and community educational tools and increasing staffing to provide education and assessment of local industry performance on dark skies lighting. These funds will also support the creation of a new permanent exhibit on dark sky preservation at the Observatory’s Frank N. Bash Visitors Center. 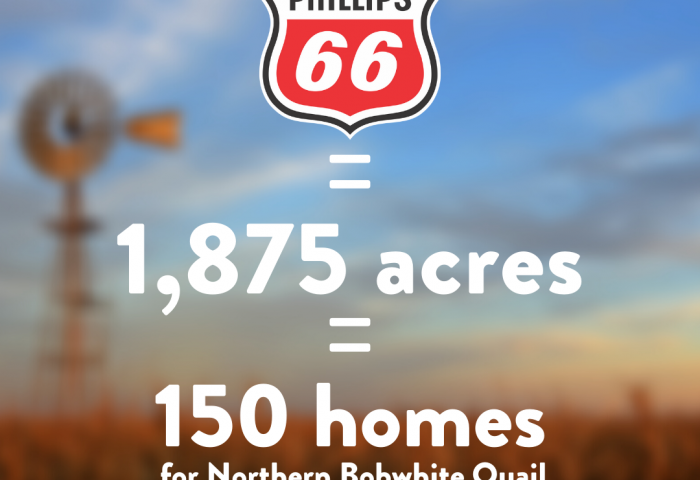 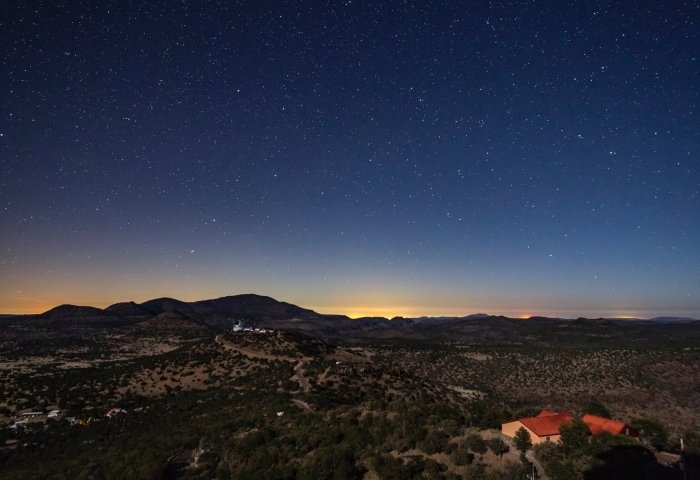 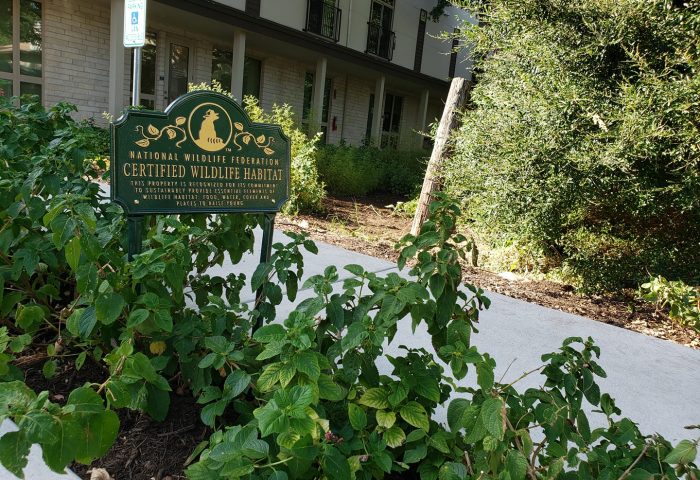 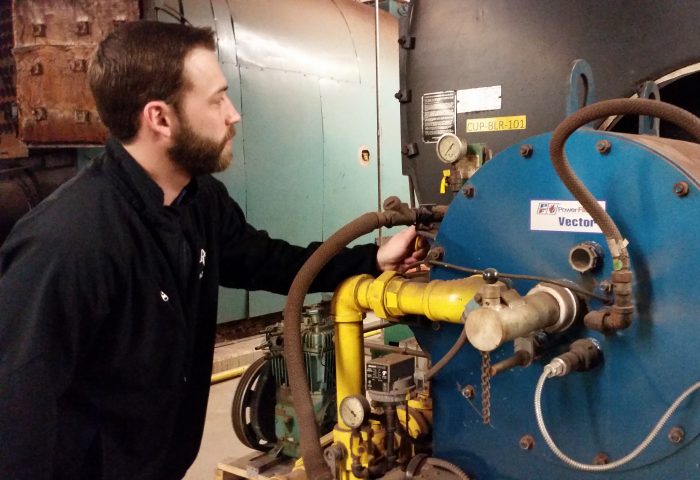 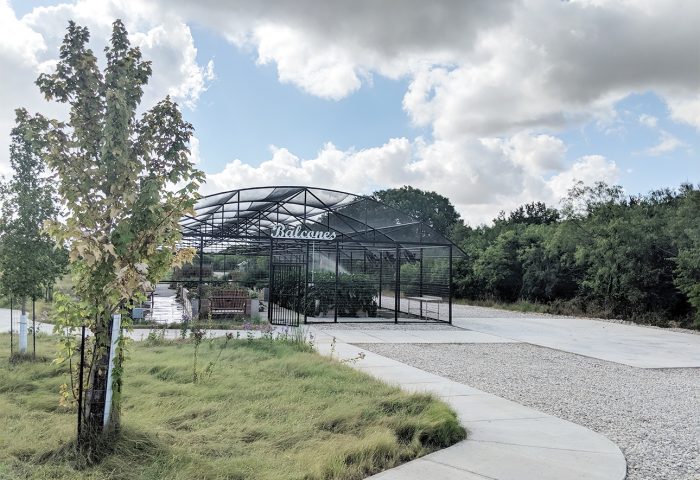 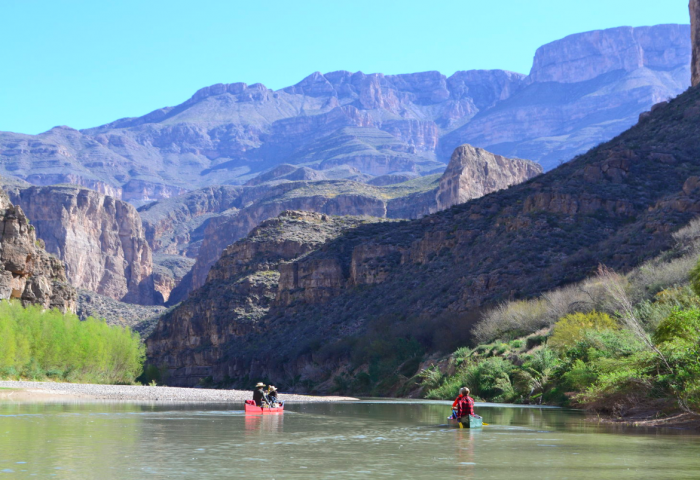 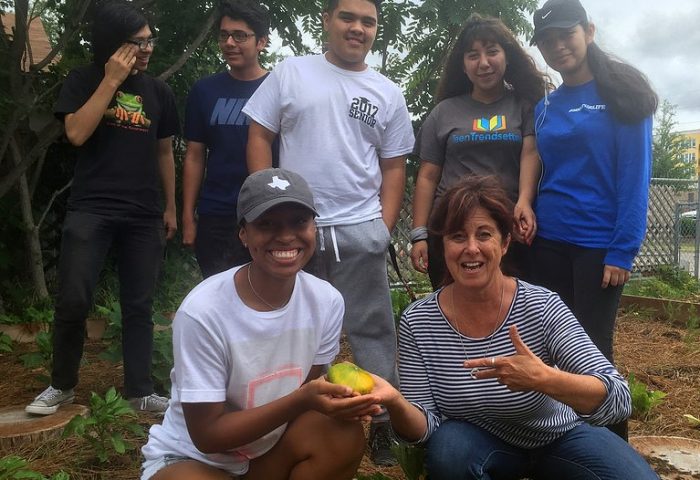 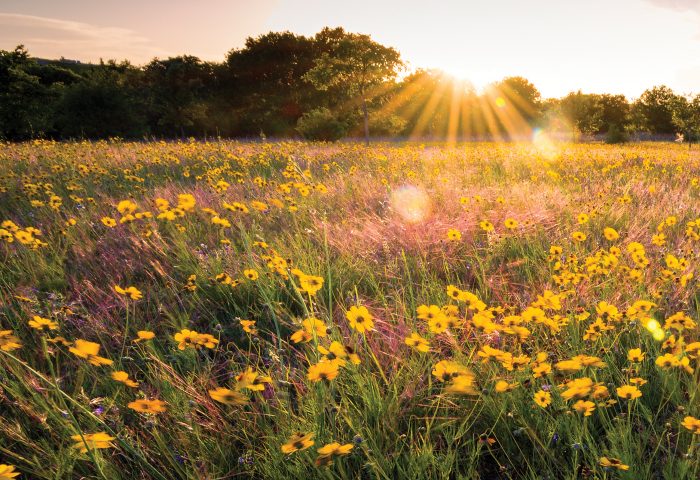 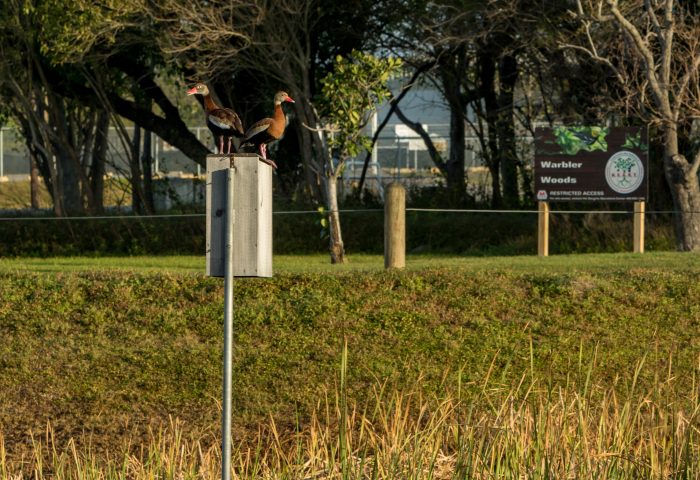 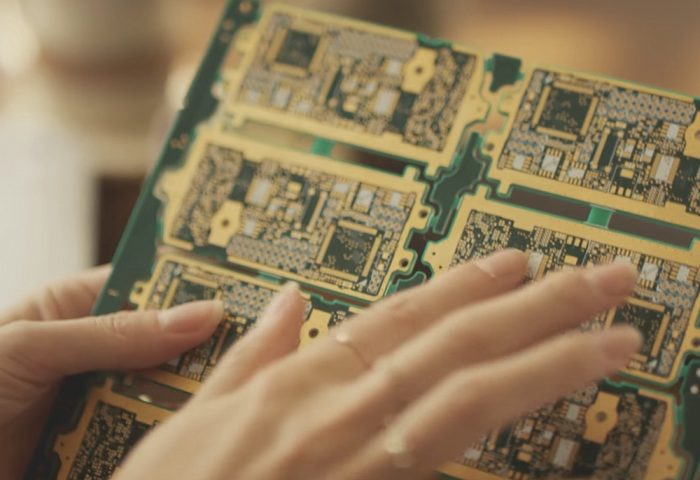 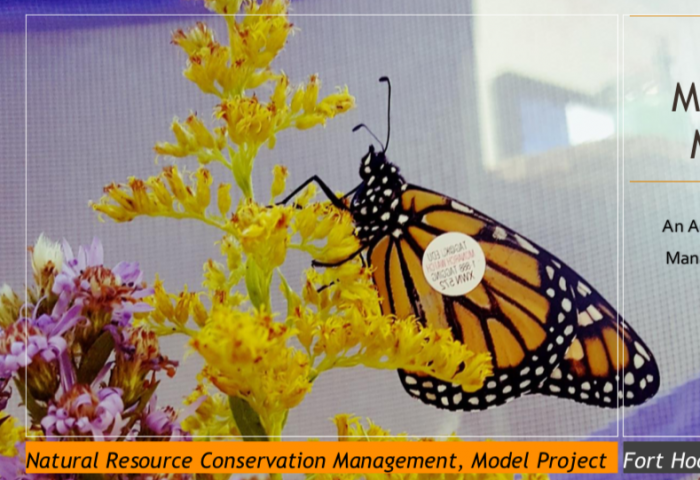 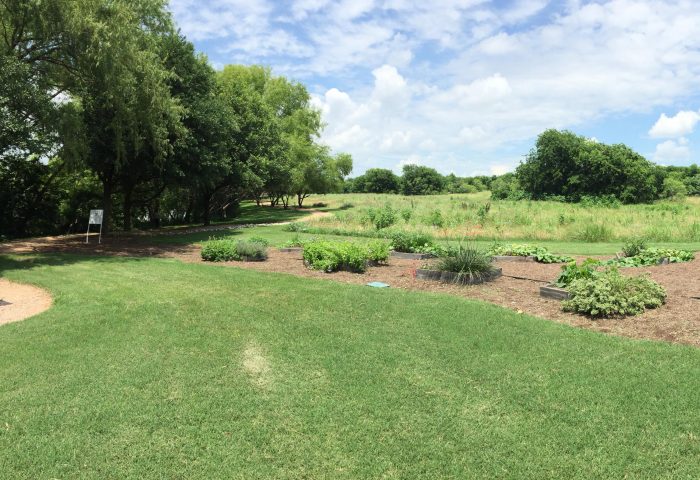 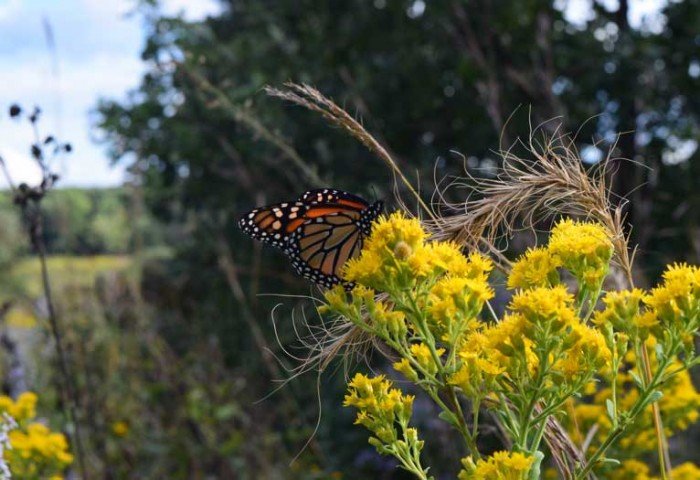