This month, we’re celebrating all the things we love about Texas……including Former First Lady Laura Bush! Mrs. Bush spends a lot of time and energy for the love of Texas. She is passionate about parks and natural resource conservation. Listen in to this month’s podcast and conversation with Mrs. Laura Bush to hear what inspires… Read More

AUSTIN, Texas — Former First Lady Laura Bush joined Texas Parks and Wildlife in Austin to celebrate the fall migration of monarch butterflies. As the founder of Texan by Nature, Bush also announced new collaborations in the state’s efforts to conserve pollination habitats in the state. Bush and Parks and Wildlife helped with habitat restoration.… Read More

AUSTIN – Former First Lady Laura Bush is championing efforts to restore the monarch butterfly population, highlighting not only the species’ beauty but its key role in the economy and the cycle of life.

AUSTIN — To the lengthy list of titles bestowed upon former first lady Laura Bush, now add “monarch wrangler.” The butterfly, that is. Bush — long a champion of conservation efforts — heralded that decidedly Texan honor on Tuesday as she touted a growing statewide partnership to preserve the migratory habitat of the increasingly threatened monarch… Read More 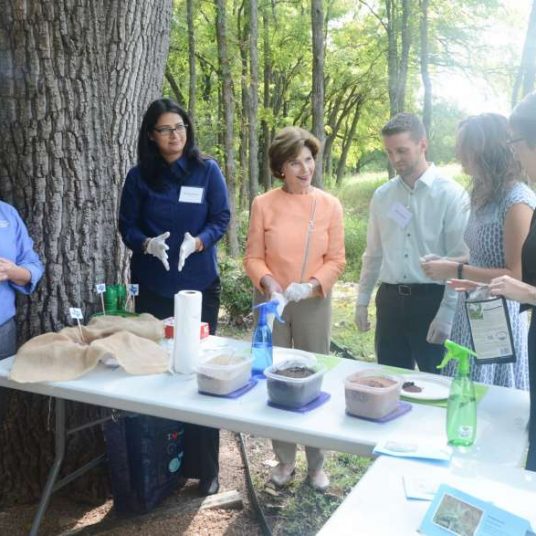 AUSTIN — Former First Lady Laura Bush pushed efforts to help the monarch butterfly population recover Tuesday, emphasizing not only the species’ beauty but its key role in the economy and the cycle of life.

AUSTIN (KXAN) — Former First Lady Laura Bush visited Austin on Tuesday to announce plans to keep the monarch butterfly from extinction. A statewide effort is underway to conserve the monarch butterfly in Texas. The state is directly in the path of the monarch’s annual migration, as the butterflies travel between Canada and Mexico making a… Read More

Laura Bush speaks about Texan by Nature during inaugural health symposium   In 2011, former first lady Laura Bush founded Taking Care of Texas in hopes of unifying the interests of conservation groups, businesses, schools, the scientific community, and faith-based organizations under one umbrella. Though the organization’s name has since changed to Texan by Nature,… Read More