A coalition of organizations is working to promote a program to protect migrating birds as they pass through Austin this spring. Travis Audubon, Texan by Nature, Defenders of Wildlife, the Austin Office of Sustainability, Balcones Canyonlands Preserve, Audubon Texas, and the Texas A&M Biodiversity Research and Teaching Collections are collaborating on the Lights Out program.

First created by the Cornell Lab of Ornithology, the program asks businesses and homes to turn out their lights between 11 p.m. and 6 a.m., in tall buildings as well as in lower structures, during the time billions of birds migrate back into the U.S. in the spring. The program collects data and provides resources for birders and researchers all over North America.

Nicole Netherton, executive director of Travis Audubon, pointed out that “Texas is in the Central Flyway,” referring to the major migratory route that stretches through the middle of North America and is traveled by nearly 400 bird species. Peak migration period in the state lasts from approximately April 19 to May 7, according to the Cornell Lab of Ornithology.

Texas is not new to the Lights Out program, as the state is one of the first points of entry where migrating birds reenter the country in spring coming from South America. Artificial lights can disorient migrating birds, causing them to collide with buildings. Millions of birds are killed in building strikes each year.

The coalition plans to list resources for bird-watching and migration on their websites, along with information on volunteer walks to look for injured birds. The data will be shared with Texas A&M and the results of the studies will be returned to each Lights Out city partner.

The topmost priority remains the reduction of bird collisions, and for that the coalition is creating partnerships to raise awareness ahead of the migration.

Bird-watching has become increasingly popular during the pandemic, so this is an opportunity to educate homeowners and business owners about how they can help protect birds during their migratory journey. There is also the chance to spot species that are rare in this part of the state.

The city of Austin is using its network and connections to get the word out. “It’s a win-win for everybody,” Caitlin Admire, an environmental program coordinator with the Office of Sustainability, said, tying Lights Out with conserving power in the city. The office is working on a proclamation by the mayor’s office.

Paul Sanchez-Navarro, a senior Texas representative with Defenders of Wildlife, said, “We are hoping this becomes a long-term commitment by cities, businesses and regular citizens to help billions of birds migrate each year.”

The program focuses on skyscrapers and mid-level buildings as well as single-family homes since different species fly at different heights. “If you turn your lights off you are decreasing the chance that a bird will get confused by a reflection in your window,” Netherton explained. Ruby-throated hummingbirds, commonly found in urban areas in Texas, are often victims of building collisions.

Travis Audubon is working on yard signs that say “Lights out tonight” in an effort to spread the word. That means turning off your porch and garage lights at night, closing your curtains and shades, and asking your office building management to shut off their lights at night, too.

This story has been corrected to remove a reference to the aplomado falcon being seen in South Texas. Photo by dominic sherony, CC BY-SA 2.0, via Wikimedia Commons.

The Austin Monitor’s work is made possible by donations from the community. Though our reporting covers donors from time to time, we are careful to keep business and editorial efforts separate while maintaining transparency. A complete list of donors is available here, and our code of ethics is explained here. 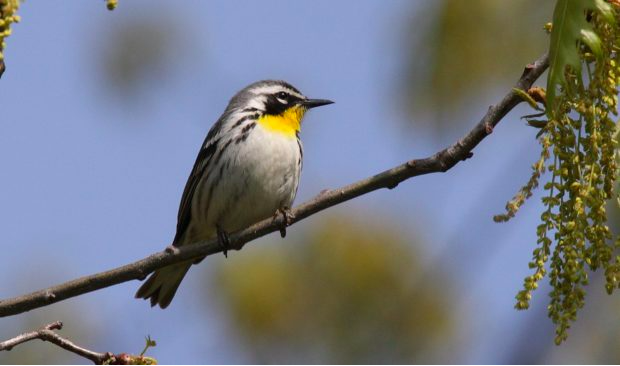