Decades of trawl fishing in the Gulf of Mexico have resulted in the loss of low-relief reef material that is vital to sustaining juvenile fish and other marine species’ survivorship and recruitment. Historically, this low-relief nursery reef was composed of loosely cemented sandstone, clay, caliche, and associated soft coral cover, and formed the base for a significant  portion of the bottom of the Gulf food chain.

Fish, such as Red Snapper depend on coastal reef structures and are one of the most commercially and recreationally important fish on the coast of Texas.

The 170 foot Dry Tortugas, arrived in the Port of Brownsville on January 5 for a deployment of 8,500 tons of concrete material, including 16,000 recycled concrete railties from BNSF, 64,000 cinder blocks, concrete pyramids, and crushed concrete – all of which create graduated stepping stones of habitat for Gulf species. 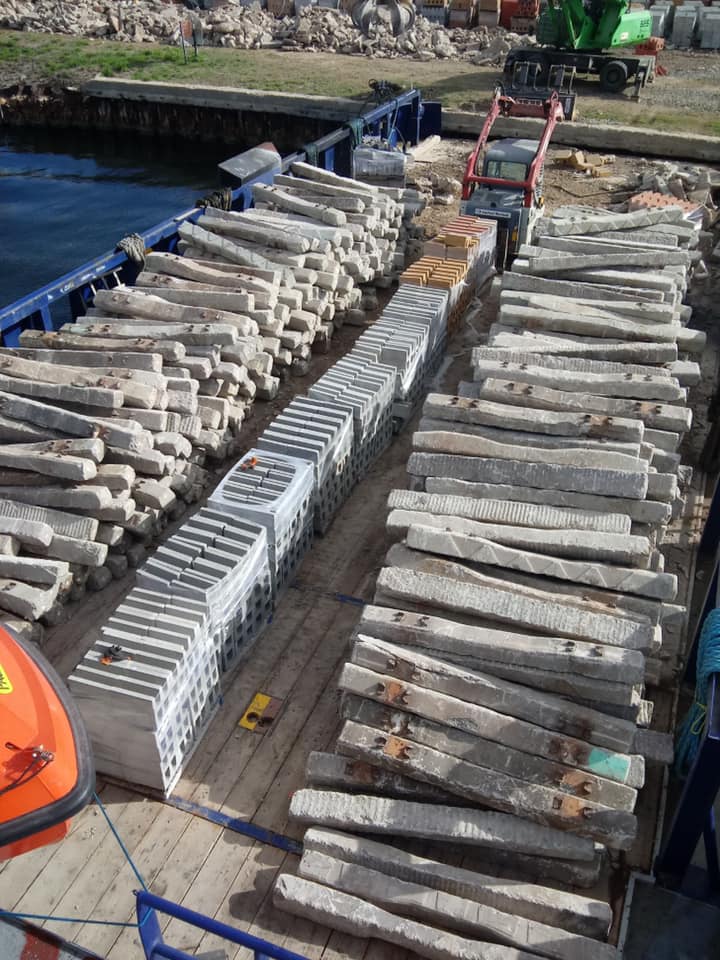 This is a lot of concrete! With the help of valued partners like Bryant Industrial Services and EMR International Shipbreaking, FoRGVR  is able to load up the ship and make many trips to deploy the reef materials. The concrete was used to create 54 patches of nursery reef across 400 acres. This installment will increase red snapper juvenile survivability, double the number of snapper the reef can raise, and provide the substrate for microorganisms like plankton to thrive that in turn feed many species in the gulf.

Get a closer look at RGV Reef’s “Big Pile” below from this side scan that Dr. Rick Klein from the University of Texas – RGV captured on February 28, 2020. For a sense of scale it is 32 feet tall and approximately 200 feet wide at the base. The cloud of specks to the left of the “Big Pile” in the photo are fish.  This is the largest structure of its kind in the Gulf. The water current wedges nutrient rich water up into the photic zone near the top of the “Big Pile”, nourishing algal growth on the structure and creating a down-current plankton bloom supporting a resident forage fish base.

Concrete isn’t the only thing that Friends of RGV Reef uses to build reef, they use decommissioned boats as well! In March the group acquired a 110 foot shrimp boat to sink, although, this isn’t an easy process. Very few boats used for reefs these days   because it’s expensive, time consuming, dirty, and dangerous work to clean them , but Keith Judd and EMR International Shipbreaking was up for the job. FoRGVR is about to deploy the 110’ Shrimp boat and another shrimp boat has been purchased to clean and deploy  – sponsorship opportunities with naming rights are available for efforts like this.

Additionally, feasibility for an underwater live webcam on the shrimp boat looks optimistic. This would be an excellent opportunity to showcase the outcomes of FoRGVR’s efforts first hand. Enthusiasm amongst local divers and fishermen is high for this project. A video is worth a thousand words – a live webcam would highlight the benefits and productivity of complex reef, nursery reef, lifestage appropriate multi-species habitat reef when compared to typical monoculture reefs that exclusively support adult fish only.

Currently, concrete railties from BNSF railroad are arriving, being stockpiled for another deployment, and FoRGVR is seeking financial support to cover the costs of a boat that takes the material offshore to be deployed for reef building.

Artificial reefs are important resources both from an ecological standpoint and an economic standpoint. The RGV Reef Restoration aims to create the largest artificial reef in Texas waters by combining low, medium, and high profile structures. One of the principal objectives of the project is to boost the population of red snapper and offer anglers the opportunity to fish for red snapper year round.

Learn more about Friends of RGV Reef on their website and stay-tuned to their Facebook page for regular updates.