Northern Bobwhite Quail are a staple native wildlife species in Texas, but their habitats are being degraded and destroyed at an alarming rate, and with habitat reduction comes a massive decline in overall population numbers.  With so many native grassland habitats being converted into agricultural fields and turning into more urbanized areas, the Northern Bobwhite quail population has declined roughly 89% since 1966.  Conversion and destruction of habitat, coupled with a growing pattern of drought conditions have made it a rough going for the Northern Bobwhite, but luckily, various conservation organizations have discovered ways to recover and restore Bobwhite habitats. At Texan by Nature, we recognize the impact that every single person can make. That’s why we’re kicking off our #TxN5WayFriday series, providing weekly insight on being Texan by Nature. Below are 5 ways to improve Northern Bobwhite Quail habitat: 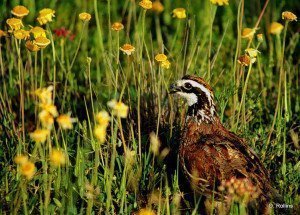 Historically, naturally-occurring wildfires managed and helped to restore native habitats by controlling the spread of invasive species, stimulating new plant growth, and burning dead plant litter.  As the human population has begun to grow at an exponential rate, we have suppressed these fires, thus negatively impacting the health of the land and increasing the risk of large fire events.  A prescribed burn is an intentionally set fire aimed at helping to restore health to an ecosystem.  In the Northern Bobwhite’s case, a prescribed burn can help stimulate the germination of food-producing forb plants and mimic the type of habitat it needs, which are shrubs, bare ground, and grass cover.

As invasive species that are low on nutrients have started to take over, it is becoming harder and harder for the Northern Bobwhite to find energy-rich food sources.  The main staple of the Bobwhite’s diet are seeds from grasses, agricultural crops, weeds, and native rangeland vegetation.  In order for the birds to thrive in a restored habitat, a diversity of food sources that coincide with the changing seasons must be planted.

Although Bobwhites get most of their water from the food they eat, supplemental water sources such as rain guzzlers are extremely beneficial.  Supplemental water sources will not only be influential to the success of Northern Bobwhite populations, it will also positively impact other native wildlife species.  Rain guzzlers are an eco-friendly way to increase chances of Bobwhite survival, because they do not pull directly from other water sources, they collect rainwater which then flows into holding tanks where it is stored for later consumption. 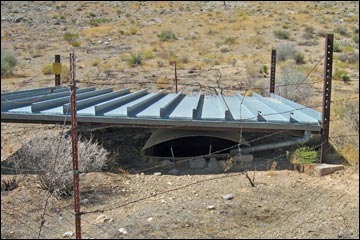 Northern Bobwhites, like most prey species, require cover if they want to avoid predation.  Along with planting shrubbery and grasses, half-cutting is an effective method to produce additional cover necessary for the bird’s survival.  Half-cutting is the process of cutting tree trunks halfway through and then pushing over the trunk and branches until they touch the ground.  This practice is most effective when clumps of 4-5 trees are half-cut within 15-30 feet of each other, and during growing season when sap is flowing.  On top of coverage, half-cutting is also great for protecting nesting sites as well as allowing for other beneficial herbaceous plants to grow.

Northern Bobwhite habitat restoration is not an overnight job, as it usually takes at least one full growing season before any change is evident.  The process takes time, but the benefits are worth it if you make the effort to research the correct methods for each restoration activity.  Take time to examine proper practices, such as tilling and disking, grazing rotation, and correct food and cover development before undertaking quail habitat restoration. If you would like help or want to learn more about ways to manage your land for Bobwhite, or many other grassland species of birds, you can contact 2019 Conservation Wrangler, Oaks and Prairies Joint Venture, for guidance!