On Ocotober 29, Michael K. Murphy, VP of Environmental Affairs at Dell Technologies, Inc. presented at Texan by Nature’s first annual Conservation Wrangler Summit & Celebration at the George W. Bush Presidential Center in Dallas, Texas. This important event brought together over 200 Texas leaders to engage in a thought-provoking summit exploring the beneficial connection between conservation and business. The event culminated in a gourmet meal and celebration of the 2018 Texan by Nature Conservation Wrangler projects.

Conservation isn’t just good for natural resources, it’s good for the bottom line. At the Summit, attendees learned how Dell Technologies has used its culture of innovation, engineering, and supply chain expertise to become one of the biggest recyclers of plastic in the world. From recycled materials to internal practices, Dell has worked to measure the impact and benefit of its conservation practices to both bottom line and culture.

To to kick of the session, Michael Murphy shared the story of Dell’s inception. Thirty-four years ago, Michael Dell started PC’s Limited which would eventually become Dell Technologies in his UT freshman dorm room. His business model was revolutionary at the time –manufacture PCs and sell directly to the consumer. Michael really took UT’s motto to heart – what starts here in Texas really does change the world. Today, Dell Technologies is a nearly $80B business with operations in 180 countries and 145,000 team members around the globe.

Michael Murphy elaborated on what the world may look like in 2020, 2030, and what role we play.We’ll be at 8.5 billion by 2030 with 3 billion more people entering the middle class. If we consume at the same rate as the U.S. does today, it will take 5 Earths to meet demand. That’s simply not sustainable.

He mentions that Dell’s customers are paying attention to this, in fact 75% of their request for proposals ask about our corporate responsibility efforts. 92% of their top 400 customers share their priorities around corporate social responsibility. Dell sees sustainability as good, smart business. It creates efficiencies for customers, reduces our costs and drives innovation. 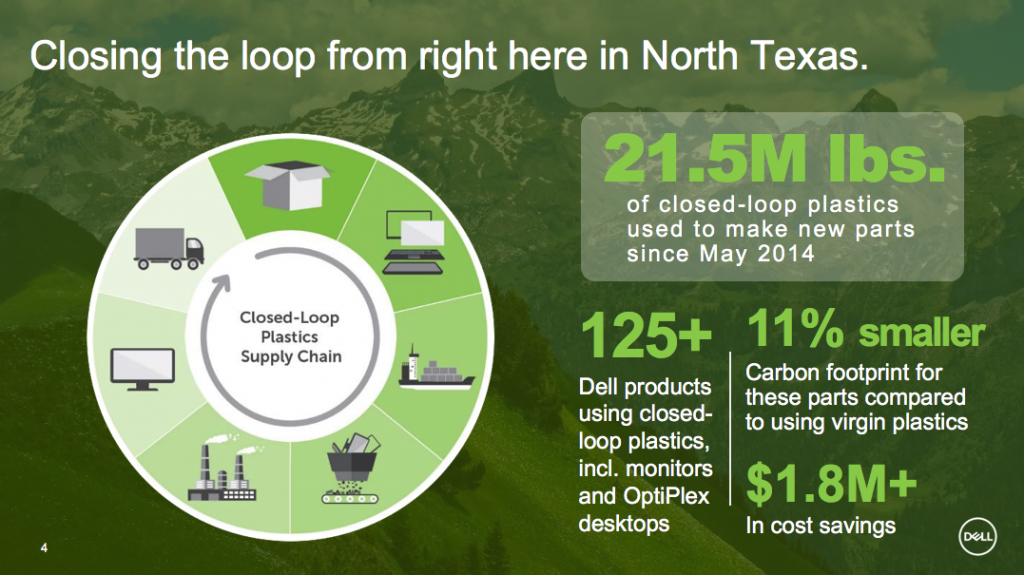 Michael closed the session with an inspiring message, “When we stand alongside our customers and suppliers on an issue that matters to them, It’s that trusted partnership that ultimately makes the investment good for Dell and for the planet. That’s why we see this as a business imperative, essential to our success.”