On June 14th, the Texan by Nature team was invited to the home of recently-appointed Bat Conservation International board member George ‘Timo’ Hixon to celebrate his appointment and mingle with BCI staff and partner group representatives. After a rousing speech by BCI Executive Director Mike Daulton, who emphasized the keystone importance of bats and bat conservation, guests in attendance were invited to experience the nightly emergence of millions of Mexican free-tailed bats (Tadarida brasiliensis) from Bracken Cave.

Situated less than 20 miles northeast of downtown San Antonio, Bracken Cave is the summer home of the largest known bat maternity colony in the world, where over 15 million of Texas’ state flying mammal congregate to raise their young every year. Bat Conservation International has been instrumental to conserving the world-class wildlife site, purchasing the land around the cave to permanently protect the cave and its inhabitants from being engulfed by encroaching suburban development. Today, Bracken Cave Preserve comprises nearly 1,500 acres of former ranchland, and is home to a variety of wildlife, including black-capped vireos, striped skunks, rose-bellied lizards, and endangered golden-cheeked warblers.

We arrived at the site around 6:30, as the sun was beginning its lazy decent towards the horizon. Welcomed by Fran Hutchins, Director of the Bracken Cave Preserve, we gathered at the natural limestone amphitheater about 30 yards from the cave’s yawning black entrance. Equipped with binoculars and large zoom camera lenses, we could barely make out a swirling mass of bats already moving in the darkness, as the hungry mothers prepared for their nightly flight. Then, by some invisible cue, the swarm burst from the cave’s mouth and was illuminated by the setting sun – millions of tiny mammals poured into the evening sky, to the amazement of people who were experiencing the phenomenon for the first time.

The female bats who migrate to the site start to arrive in late February, having departed from their overwintering sites after mating. By summer, male and female bats take up residence in separate bachelor and nursery colonies. Each mother bat produces a single young in early June; babies are born naked and flightless and remain close to the mother for the first hours as they learn each other’s scent and vocalizations. Pups have an instinctual tenacious clinging response, and thousands of the helpless young cling to the cave walls and to one another in designated nursery areas.

Bat mothers have some incredible abilities. After giving birth, mother bats roost separately from the nursery, but face the daunting task of finding her own pup among millions (up to 500 per square foot) when it’s time to nurse. Upon their return, mothers and pups are able to recognize each other by voice and scent, in near-total darkness among the cacophony of thousands of other calling bats. As the pups grow – often more than a third of the mother’s bodyweight – they join their mothers on nightly feeding flights by clinging to her underwing nipple. Nursing mother bats must consume their weight (~10-12 g) in flying insects nightly to produce enough milk for the growing pup; the 15+ million female bats at Bracken Cave can easily consume over 140 tons of insects in a single night.

The bats’ nightly insect hunt has an enormous cumulative effect not only on the surrounding natural landscape, but also on the nearby agricultural economy in the form of non-toxic, free pest-control. Mexican free-tailed bats prey on the flying adults of several significant agricultural pest species, including fall armyworm, cabbage looper, tobacco bud-worm, and cotton bollworm. In south-central Texas alone, researchers estimate the bats’ pest control value to cotton production at around $741,000/yr, saving farmers money on pesticides and crop yield lost to pests (Cleveland et al. 2006). Worldwide, frugivorous and nectivorous bats provide an even larger array of ecosystem services – tangible benefits for humans derived from healthily functioning ecosystems – including pollination of crops and seed dispersal of important wild plants. 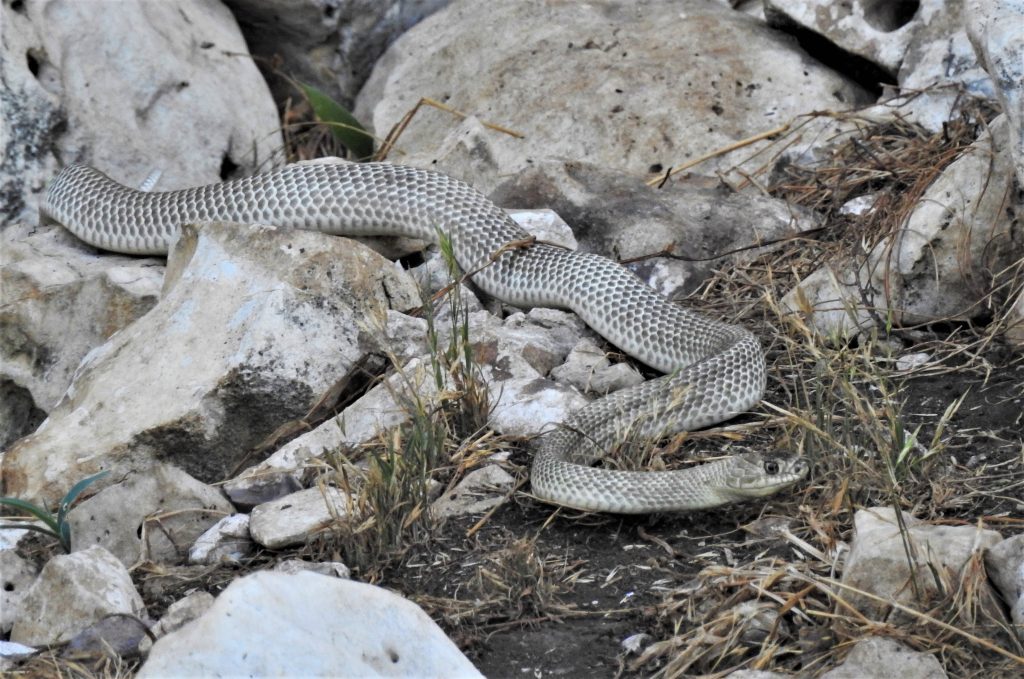 The swirling spectacle leaving the cave lasted for about 25 minutes but was punctuated with drama as we witnessed the impressive number of bat predators taking advantage of the “buffet” funneling into the darkening sky. Peregrine falcons, merlins, and a half dozen Swainson’s hawks carved through the clouds of tiny mammals, attempting to isolate and snatch single members in midair. At the rocky mouth of the cave, a Western Coachwhip snake lurked partially-hidden in the shadows between rocks, its large eyes trained on any low-flying bats who strayed too close. While we didn’t see any before dark, Great-horned owls and striped skunks are also common bat predators at this site.

A break in the emergence – described by Preserve Director Fran Hutchins as separate adult flocks leaving the cave on set intervals – gave the group time to break for dinner and a short presentation on the site and its inhabitants. After the meal, folks took some time to explore the nearby trails before the next emergence started. Following the Golden-Cheeked Warbler Trail (so named for the endangered songbird that breeds at the Preserve), we spotted a few other bird species that call the site home: Eastern Phoebe, Painted Bunting, Inca Dove, Northern Cardinal, Blue-Gray Gnatcatcher, and White-Eyed Vireo. Giant Walkingsticks, Hackberry Emperor butterflies, countless grasshoppers, and Central Texas leaf-katydids were also common sights on the rocky path through oak and Ashe juniper as we looped back towards the cave’s entrance, where the ammonia stench of guano greeted us before we could glimpse the bats streaming into the sky.

The second emergence was no less impressive than the last, accompanied by the same gentle thrum of millions of moving wings. But as the twilight settled, the flood of bats leaving the cave dwindled to the occasional trickle, and the sounds of conversation rose in the amphitheater as guests began to share photos and enthusiastically recount the natural spectacle we’d all just been so lucky to witness.

Bracken Cave is a truly unique and priceless site – one that will never cease to amaze. Thanks to the ongoing efforts of BCI and its partners, the site will be preserved in perpetuity for people around the globe to continue to visit, learn, and marvel.

As the preserve is a protected, private site, access is typically restricted to BCI members for guided tours – in addition to the night emergence tour, members have the choice to camp overnight at the site, or access the Preserve before dawn to experience the bats’ morning return.  BCI membership includes a number of additional perks and supports the organization’s mission to conserve the world’s bats and their ecosystems. Visit batcon.org/join to learn more.

Texan by Nature is honored to partner with Bat Conservation International and over 50 other organizations in Texas who work every day to benefit people, prosperity, and natural resources by caring for our land, water, and wildlife. If your organization is interested in becoming a Conservation Partner click here to learn more.