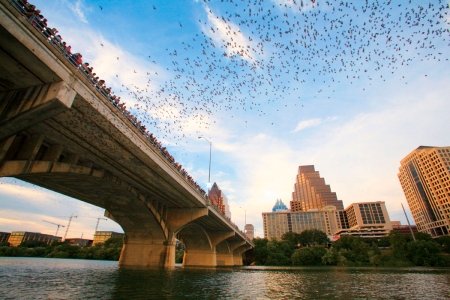 Summertime in Texas means a whole lot of swimming, music festivals, BBQ, and bats—millions and millions of bats! Each year, colonies of female Mexican free-tailed bats (Tadarida brasiliensis) migrate north to Texas from Mexico to roost in caves and even under bridges. In fact, Austin hosts the largest urban colony of bats in the world, right under the Congress Avenue Bridge. Every summer night, crowds of people gather on the bridge to watch the 1.5 million bats emerge from beneath to feed on insects. According to Texas Parks & Wildlife, Austin’s bat colony eats around 30,000 pounds of insects each night, making them incredibly effective, natural bug control! Visit this page for more information about the bats at Congress Avenue Bridge. To learn even more about bats, including where else you can spot them across Texas and how to build a house for a bat, check out Texas Parks & Wildlife’s online bat resource.

Visit One of the Largest Colonies on Earth at Bracken Cave

And if you love bats as much as we do, considering becoming a Bat Conservation International Member and schedule a time to visit the bats at Bracken Cave. It’s a great, educational summer activity for the whole family.